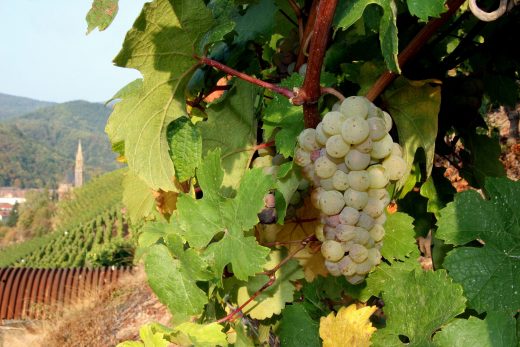 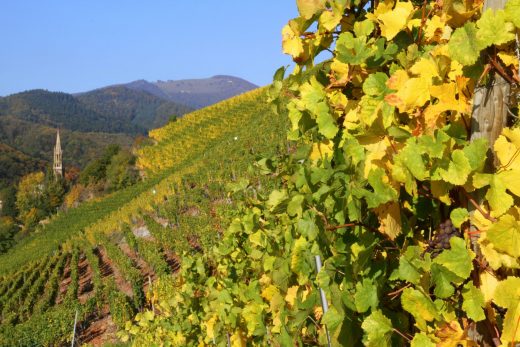 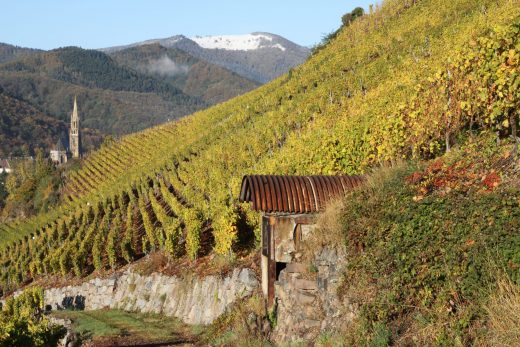 Story of a Grand-Cru.

The most southern of the Alsace vineyards was already mentioned by the Thann Franciscan monks during the Middle Ages. In the XVth century the Grand Cru reached its maximum expansion. Saint-Urbain’s Chapel dates from this period – he is the patron saint of vineyards- and also the Bangard hut; the Bangards were vineyard keepers, elected every year.

The Rangen inpired a plethora of authors including Michel de Montaigne who evoked the “slopes full of vines, the most beutiful and best-cultivated, extending so far that the Gascons who were there said they had never seen so many streching so far”. Today the Chemin Montaigne crosses the Rangen.

Subsequently the vineyards experienced difficulties but major recombination of the plots of land and the arrival of renowned vine growers ensure a renaissance of the Grand Cru from 1978 onwards.

Covering an area oh 18.5 ha, the Rangen is the only Alsace vineyard classified in its entirely as Grand-Cru.

The Rangen montain faces due south with its steep slopes (45°). Maximum exposure to the sunlight, frequent rainfall and the Thur at its feet ensure the vital balance of sun and water.

The vineyard owes its reputation to its unique volcanic ground. Siliceous rocks and basic lava provide a soil rich in fertilisers.

The know-how of the vineyards owners and the quality of the vines guarantee the production of excellent quality wine.

“Chemin Montaigne” and the “Rue du Vignoble” : pedestrian access only. Controlled access during the grape harvest (end of september and october).

From the “Rue du Vignoble” : cycle track then path through the vines to rejoin the “Chemin Montaigne”.

From the “Rue du Kattenbachy” : at the end of the valley on the right, start of the “Chemin Montaigne” and the “Health Route”.